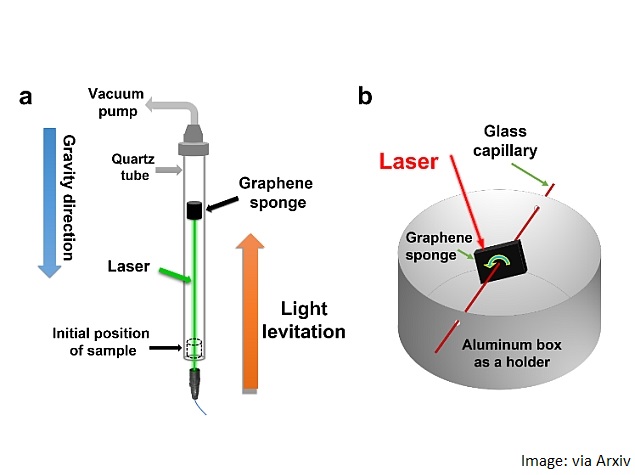 The wonder material graphene may be used to build fuel-free spacecraft that runs on just sunlight, researchers say.

These sheets of carbon one atom thick can turn light into action, which could form the basis of a fuel-free spacecraft.

Yongsheng Chen from the Nankai University in China and his colleagues have been investigating whether larger arrangements of carbon can retain some of these properties.

They have published details of a “graphene sponge”, a squidgy material made by fusing crumpled sheets of graphene oxide.

While cutting graphene sponge with a laser, they noticed the light propelled the material forwards.

That was odd, because while lasers have been used to shove single molecules around, the sponge was a few centimetres across which is too large to move.

Researchers shot lasers of different wavelength and intensity at pieces of graphene sponge placed in vacuum.

They were able to push sponge pieces upwards by as much as 40 centimetres. They even got the graphene to move by focusing ordinary sunlight on it with a lens.

Photons can transfer momentum to an object and propel it forwards, and in the vacuum of space this tiny effect can build up enough thrust to move a spacecraft, ‘New Scientist’ reported.

Recently, the Planetary Society in California launched a small solar sail to test the technology. The forces the team saw were too large to come from photons alone.

Researchers believe graphene absorbs laser energy and builds up a charge of electrons. Eventually it can’t hold any more, and extra electrons are released, pushing the sponge in the opposite direction.

They were able to confirm a current flowing away from the graphene as it was exposed to a laser, suggesting this hypothesis is correct.

Researchers said graphene sponge could be used to make a light-powered propulsion system for spacecraft that would beat solar sails.