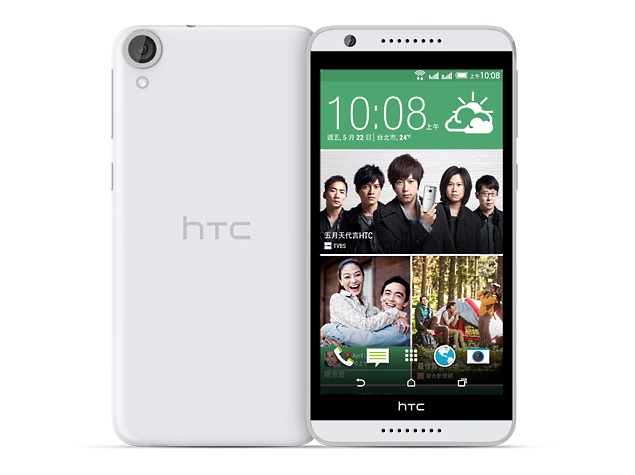 The HTC Desire 820G+ Dual SIM runs Android 4.4 KitKat and features a 5.5-inch HD (720×1280 pixels) display. It packs a 13-megapixel rear camera with LED flash, and an 8-megapixel secondary front-facing camera, just like the HTC Desire 820. It is powered by an octa-core processor (clocked at 1.7GHz) coupled with 1GB of RAM.

The 16GB inbuilt storage on the Desire 820G+ Dual SIM is expandable via microSD card (up to 32GB). Connectivity options on the handset include Wi-Fi, FM radio, Bluetooth, GPRS/ EDGE, GPS/ A-GPS, 3G and Micro-USB. According to the official listingof the HTC Desire 820G+ Dual SIM, the smartphone doesn’t feature 4G connectivity support. The handset is backed by a 2600mAh battery that can offer up to 12 hours of talk time and up to 560 hours of standby time. It measures 157.7×78.74×7.74mm and weighs around 155 grams.

Much like other recently launched HTC smartphones, the Desire 820G+ Dual SIM supports HTC DotView cases. The launch was first reported by Sogi.com.

HTC Taiwan has also launched the Desire 626G+ Dual SIM in Taiwan. The smartphone was launched in India back in April priced at Rs. 16,900.

The HTC Desire 626G+ Dual SIM features a 5-inch HD (720×1280 pixels) resolution display and is powered by a 1.7GHz octa-core processor coupled with 1GB of RAM. A 13-megapixel autofocus rear camera with BSI sensor, f/2.2 aperture and LED flash is onboard, apart from a 5-mgepixel front-facing camera with the same sensor and f/2.8 aperture. Both are capable of recording full-HD videos. The handset equips 8GB of inbuilt storage, which is further expandable via microSD card (up to 32GB). However, the Android-based handset will come with HTC BlinkFeed and Sense UI on top. 3G connectivity is also included in the handset besides Wi-Fi, Bluetooth 4.0, and GPS. The Desire 626G+ Dual SIM, measuring 146.9×70.9×8.1mm and weighing 138 grams, will be available in Blue Lagoon & White Birch colour variants. A 2000mAh Li-Po non-removable battery backs the smartphone.