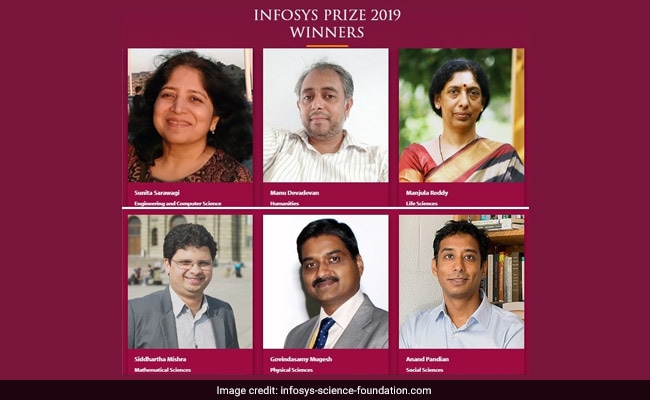 NEW DELHI: Infosys Science Foundation (ISF) announced the winners of the Infosys Prize 2019 in six categories today. The Prize has been declared for Engineering and Computer Sciences, Humanities, Life Sciences, Mathematical Sciences, Physical Sciences and Social Sciences categories. The Prize, given annually, celebrates the success of the recipients in science and research by recognising their achievements in each category, the ISF said in a statement. The prize for each category comprises a pure gold medal, a citation and a prize purse of USD 100,000 (or its equivalent in Rs. which is Rs. 71 lakh approximately) this year.

The Infosys Prize 2019 for Engineering and Computer Science is awarded to Sunita Sarawagi, Institute Chair Professor, Computer Science and Engineering, Indian Institute of Technology (IIT), Bombay, for her research in databases, data mining, machine learning and natural language processing, and for important applications of these research techniques.

The Prize, according to the Foundation, “recognizes her pioneering work in developing information extraction techniques for unstructured data”.

Prof. Sarawagi’s work has practical applications in helping clean up unstructured data like addresses on the web and in repositories which then helps in more efficient handling of queries, the Foundation said.

The Infosys Prize 2019 for Humanities is awarded to Manu V. Devadevan, Assistant Professor, School of Humanities and Social Sciences, IIT Mandi for his original and wide-ranging work on pre-modern South India.

“He critically reinterprets much of the conventional wisdom about the cultural, religious and social history of the Deccan and South India. Dr. Devadevan’s primary research interests include political and economic processes in pre-modern South India, literary practices in South India and the study of ancient inscriptions from the region,” the Foundation said in a statement.

The Infosys Prize 2019 for Life Sciences is awarded to Manjula Reddy, Chief Scientist, Centre for Cellular and Molecular Biology (CCMB), Hyderabad for her groundbreaking discoveries concerning the structure of cell walls in bacteria.

According to the Foundation, Dr. Reddy and her colleagues have revealed critical steps of cell wall growth that are fundamental for understanding bacterial biology. “This work could potentially help in creating a new class of antibiotics to combat antibiotic resistant microbes” it said.